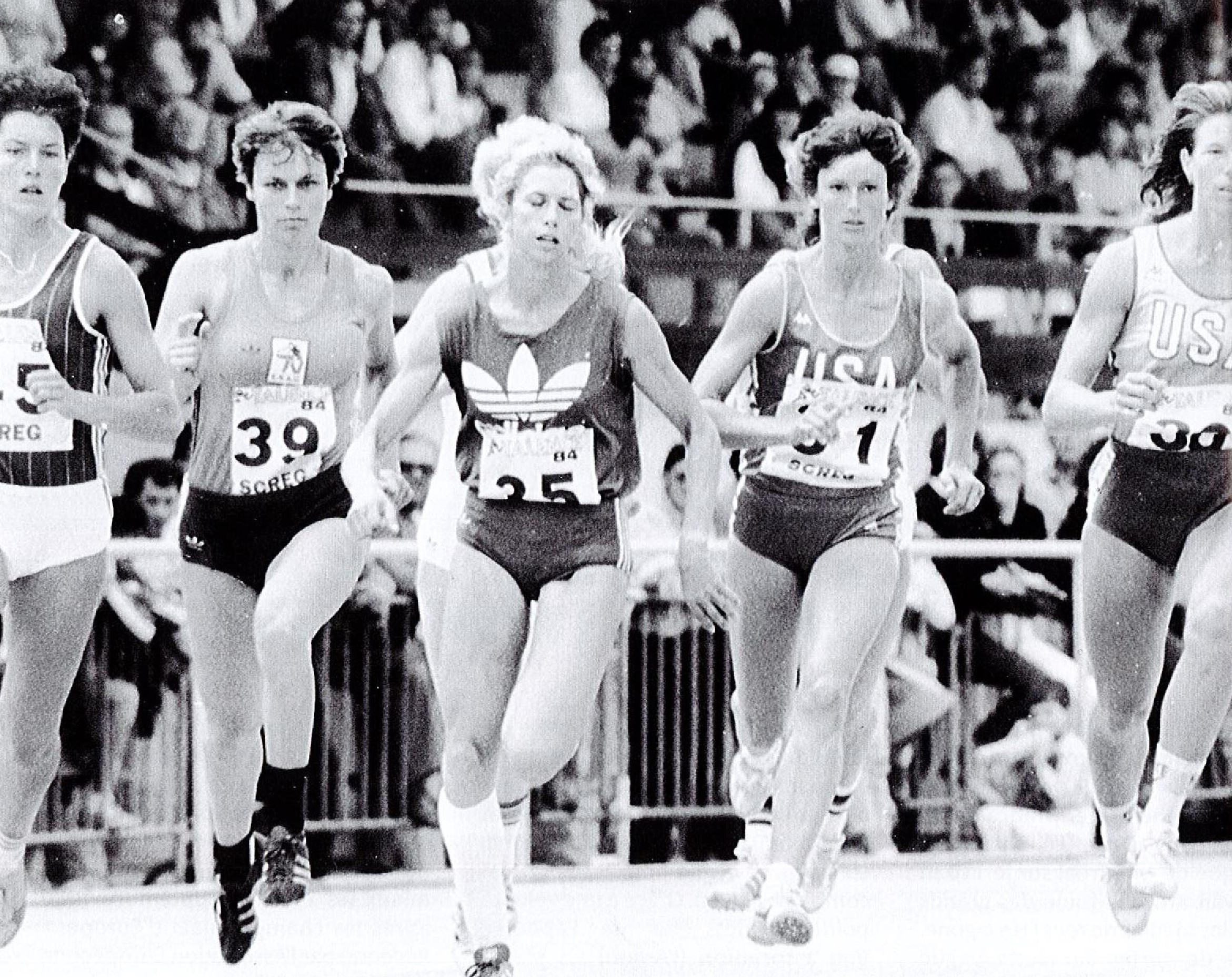 THE FIRST YEARS OF THE DECASTAR

1976 : first edition with the participation of Guy DRUT, recent Olympic Champion of the 110 m hurdles. He came to take up a challenge on a decathlon, he finished 5th and set the stadium record for the 110 m hurdles, never equalled to this day.

1992 : The world record is broken by the American Dan O’BRIEN, triple World Champion and Olympic Champion in Atlanta.

1996 : 20th anniversary of the Decastar, with the participation of Jean GALFIONE, Olympic Champion in Atlanta. He achieved the best world performance in the pole vault in a decathlon.

1999 : Eunice BARBER, World Champion in Seoul, wins the IAAF World Challenge, after a hard-fought victory at the Decastar. Tomas DVORAK, then World Recordman, wins the decathlon.

2002 : Roman SEBRLE, new world record holder (in the footsteps of Dan O’BRIEN and Tomas DVORAK) and recent European Champion in Munich, comes to Talence to consolidate his place as world leader. But it is Tom PAPPAS who wins and takes the 1st place at the IAAF Challenge.

2003 : Our Frenchmen surpass themselves, three of them climb on the first steps of the podium. Laurent HERNU wins, followed by Romain BARRAS and Lionel MARCENY. Never seen in Talence!

2004 : Officialization of the 1st women’s decathlon won by Marie COLLONVILLE who becomes the first World Champion of this discipline. For the men, the podium of the Olympic Games is confirmed with Roman SEBRLE, Bryan CLAY and Dimitry KARPOV.

2006 : The Decastar celebrates its 30th anniversary. Ladji DOUCOURE is the godfather of this edition. An exceptional line-up, but also the presence of the great legends of combined events such as Christian PLAZIAT, Alain BLONDEL, Heike DRESCHLER. To mark this anniversary, a souvenir book was published.

2007 : After the World Championships in Osaka, the young Belarusian Andreï KRAUCHANKA, 21 years old, makes a superb performance and wins the event.

2009 : After the World Championships in Berlin, Talence receives again the big names of the combined events. The Olympic Champion Nataliya DOBRYNSKA and Oleksyi KASYANOV win respectively the heptathlon and the decathlon. 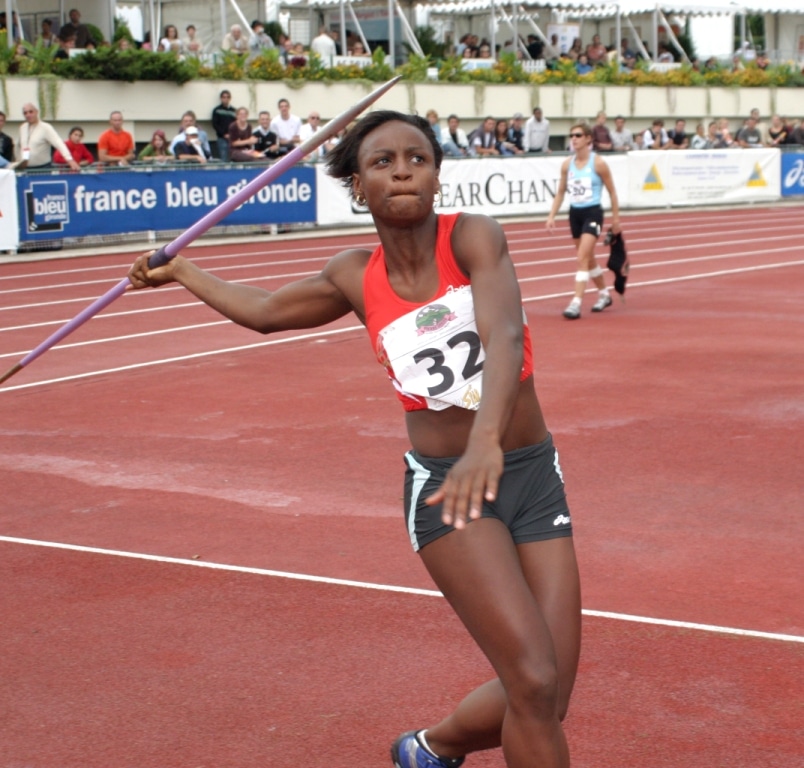 2010 : For the first time, the Cubans are in Talence and do not miss their entry. Leonel SUAREZ wins the decathlon while Tatyana CHERNOVA wins the heptathlon. Romain BARRAS, European Champion in Barcelona, finishes 3rd and wins the IAAF World Challenge.

2012: After the London Olympics, Hans VAN ALPHEN wins the event and is ranked first in the World Challenge. The Czech Barbora SPOTAKOVA, double Olympic Champion in her discipline, breaks the stadium record in the javelin.

2013: After the World Championships in Moscow, Ashton Eaton, Olympic Champion, World Champion and world record holder (9039 points in 2012) and Renaud LAVILLENIE, who came to compete successfully against the decathletes. Damian WARNER and Hanna MELNYCHENKO won this edition.

2015 : Although the athletes are all tested by the recent World Championships in Beijing or are already looking forward to the Rio Olympics, Talence still brings together a large number of the best combination athletes of the moment. After 2 days rich in emotions (records and withdrawals), Gyorgyi ZSIVOCZKI-FARKAS (6306pts) and Willem COERTZEN (8187pts) take the first places. The young Dutchwoman, Nadine VISSER, breaks the stadium record in the 100m hurdles.

2016 : The Decastar celebrates its 40th anniversary. With Guy DRUT, guest of honor and some former athletes, the edition is placed under the sign of the sport, the party and the memory. Very nice duel among the athletes, it is necessary to wait for the end of the last event, as well for the men as for the women to know the winner. Oleksiy KASYANOV finishes first after a hard fight with the young Canadian Pierce LEPAGE in the lead since the beginning of the competition. In the women’s competition, Nadine BROERSEN won after a superb duel with the Cuban Yorgelis RODRIGUEZ (4 points difference).

2017 : The Decastar 2017 took place in very rainy weather conditions, nevertheless the public was very present during these two days of competition. The Canadian winner Damian WARNER took the lead from the second event to never let go of the first place until the end of the decathlon, he finished with 8252 points. The podium is completed with the German Kai KAZMIREK and the third place goes to the Ukrainian Oleksiy KASYANOV. In the women’s category, the first place goes to Anouk VETTER who was neck and neck throughout the heptathlon with the Hungarian Xénia KRIZSAN and the Cuban Yorgelis RODRIGUEZ. Anouk VETTER wins the heptathlon with 6363 points.

2018 : The 2018 edition brought together 29 international athletes, attracting more than 15,000 people over two days. After two days of competition, Kevin MAYER became the first Frenchman to break the world record in the discipline with 9126 points, 81 more than the record previously held by American Ashton EATON. In the women’s event, Carolin SCHÄFER (GER) won the heptathlon with 6457 points.

2019: Exceptionally in June because of the World Championships in Doha, this edition has gathered again this year exceptional athletes and an enthusiastic public! The Belgian Nafissatou THIAM won the heptathlon, achieving a total of 6819 points for her first participation in the Decastar: the second best performance of her career! After a great first day (personal bests in height and weight), she also achieved her personal best and the Belgian record in long distance on Sunday. Pierce LEPAGE took the first step of the podium in the decathlon with 8453 points, bringing back a nice victory to Canada. Leading the competition throughout the first day by surpassing his best time in the 100m (10″31), he had an impressive contest in the pole vault where he broke the 5m25 mark, shattering his personal best. 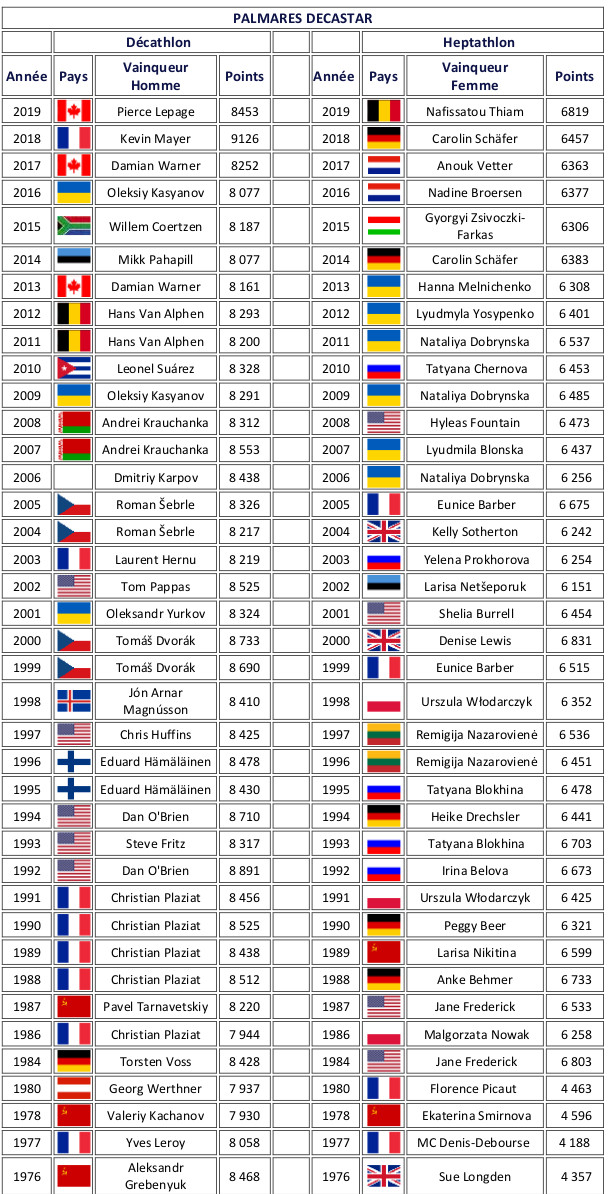 All the results of the past editions of the Décastar

All the information to become a sponsor of Décastar

All information for the media to come and cover the Decastar.

Come and experience the Decastar from the inside!