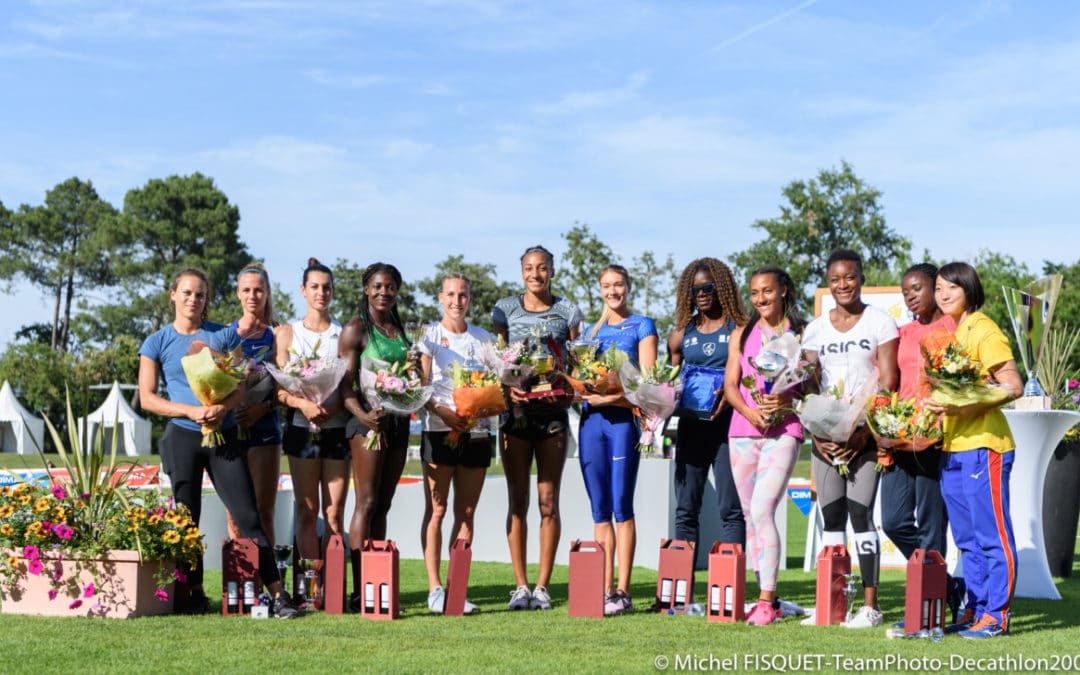 This Décastar 2019, which took place on June 22 and 23 due to Doha World Championships, once again brought together exceptional athletes and an enthusiastic audience at the Pierre Paul Bernard stadium in Talence!

Belgian Nafissatou Thiam won the heptathlon, achieving a total of 6819 points for her first participation in the Décastar: the second best performance of her career! After a magnificent first day (personal bests in high jump – 2m02 and in shot put), she also achieved her personal best and the Belgian record in long jump on Sunday. Despite an elbow injury during the javelin, she continued to compete. She kept her position as leader and secured her ticket for the world championships and for Tokyo 2020 under the encouragement of the 7,000 people present on Sunday. Second place in the competition was won by Xénia Krizsán with 6619 points, setting her personal best and the Hungarian record, followed by Latvian Laura Ikauniece (6518 points).

Pierce Lepage climbed to the top of the decathlon podium with 8,453 points, bringing back a great victory for Canada. Leading the competition throughout the first day exceeding his fastest time in the 100m (10.31), he had an impressive pole vault competition where he passed the 5m25 bar, smashing his personal best. The podium is occupied by the American Zach Ziemek who wins 8344 points, while Thomas Van der Plaetsen brings the bronze medal to Belgium with 8214 points.

The Décastar also shone with its side events: Handisport course, triathlon of our College Athletes , youth events with the Gironde Departmental Committee, Business Club course, 4×200 relay of the Nouvelle-Aquitaine League: all the athletes completed one week-end impressive under the June sun.

Thank you to all the athletes of the Décastar 2019 who have all been wonderful throughout this weekend as well as volunteering and to the staff who give their all! Every year, we see how lucky we are to host a welcoming meeting of athletes who are as pleasant, respectful and close to the public.